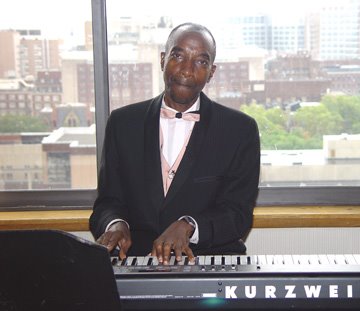 Alfred Pollitt, known to many in the music world as "Alfie", has been studying and playing music since receiving his first piano lessons at the tender age of three. A native of Bryn Mawr, Pennsylvania, Alfie was surrounded and inspired by all types of music and was given classical piano instruction from his mother and father, both respected and influential members of the Philadelphia art and music communities. Since his first piece of musical composition in 1958 entitled "15th Street", Alfie has written well over one hundred songs.

Some of his major jazz influences include John Coltrane, McCoy Tyner, Horace Silver, and Jimmy Smith. These and other musical greats helped to shape and formulate Alfie's diverse playing style. Throughout Alfie's aspiring musical career he has had the fortunate opportunity to perform with a broad spectrum of prominent Jazz and R&B performers, including: Donald Byrd, Archie Shepp, Art Blakey, Norman Connors, Sister Sledge, Billy Paul, Stephanie Mills, George Howard, and the Four Tops, along with Alfie's own bands and ensembles. Alfie toured extensively with legendary R&B superstar Teddy Pendergrass, which earned him (Alfie) two platinum recording credits to his impressive list of achievements. Mr. Pollitt has also represented Philadelphia at the Ocho Rios Jazz Festival in Jamaica (1995) and at the Festin Third International Music Festival in Salvador, Bahia, Brazil (1993). Besides being a musician, Alfie is known as a teacher and mentor to many musicians and other people in his surrounding communities.

Additionally, Alfie has extensive experience of having composed and co-written musical works, including: theme songs and jingles for events, organizations, etc. A few examples of are: theme/jingles for The Mataah Network's, "The Black Music Association" and "The Africamericas Festival". He has also collaborated as writer of "Our Family Reunion", (a piece that promotes family reunions) and "Malcolm X" (an epic work which depicts events in Malcolm's life in song). For your next grand event or special occasion, call 215-748-7494, or email Alfie Pollitt.

Celebrate Jazz Appreciation Month at Jazz on Cecil B. with Alfie Pollitt!

Alfie is a fabulous pianist.
I love to hear him play Sonny Clark.

I,ve had the pleasure of meeting afie at a gathering we both attened. Me being a music person,we sort of clicked immediately on a music tip. But what I obsorbed from him more so, was his spiritaulity. We connected. I continue to this day stay in contact periodicly, because he is a sincere brother. May Allah continue to bless him. ABDUL.