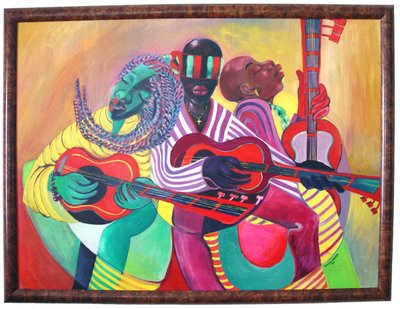 CLICK BELOW TO BID!
"Blind Man's Band" on Ebay
This work is a framed original oil painting on canvas and was completed in 1995, by the late Lucien Crump, Jr. The inspirations for this work were his roots in the music and festive atmosphere of the "Big Easy". The piece was purchased by the current and ONLY owner. The unframed dimensions of the canvas are 28" high x 35.5" wide. Add 2" to dimensions with the frame. The work is in mint condition (including the framing).
Artist's Bio
A naturally talented artist, who began painting at the age of 7, Lucien Crump’s own art “... can be found in the collections of Bill Cosby and Harry Belafonte, and other private collections”. Crump was born in New Orleans, Louisiana, and attended Morehouse College and Southern University. He received a Master of Art degree in 1982 from New York University, and taught art in four different states for a total of 27 years. In 1979, Crump founded his art gallery of the same name, which he proudly declares, “Is the ﬁrst privately owned black art gallery in Philadelphia”. And in 1983, a business relationship with October Gallery turned into a dealer’s collaboration. Crump’s gallery showcases various forms of art from the African diaspora. Although he retired from teaching in 1991, he passed on artistic traditions by creating and selling various forms of artistic expression to those that had sought these mediums and found them difficult to ﬁnd. Crump’s artistic creations have appeared in several galleries and museums.
Mr. Crump's estate is planning a tribute and auction where, presumably, this original work would return a significantly higher premium! Check it out for yourself! (215-843-8788)
Posted by LoHo at 8/26/2006