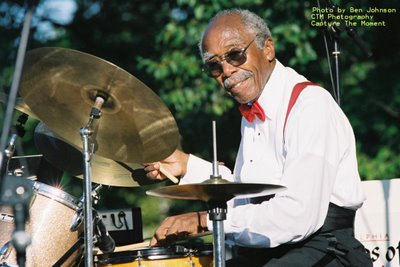 Photo by Ben Johnson
A celebration of the life and art of legendary drummer Butch Ballard will be on hand when he and his band perform at the Collingswood First Thursdays Jazz Concert Series on December 7th, at the Collingswood Community Center (30 Collings Ave, Collingswood, NJ) Show starts at 7:30PM. Admission is $10/$5 for students. BYOB. Free sodas. For info: 856-858-8914

This will be a BIRTHDAY PARTY for Butch (he's turning a glorious 88 years old)...so there will be FREE cake!

Eugene Chadbourne from the All Music Guide wrote:
One of the great early jazz drummers, Butch Ballard could make a snare drum sound as it if was being hit by a ball bearing. Before his 25th birthday he was the choice of some of the most musically demanding bandleaders from the poignantly humorous pianist and singer Fats Waller to the humorously poignant trumpeter Cootie Williams. When Ballard went into education in the mid '80s, he was allowing students access to a treasure trove of experiences, from his affiliation with Louis Armstrong after the second World War to his running involvement with both the Duke Ellington and Count Basie bands (one of the very, very few musicians who toured and recorded with BOTH bands). The latter aspect of his career provided rich fertilizer for his garden of professional associations, which in the '50s included tours and recording with both big band giants as well as a variety of stimulating projects with bandstand friends such as Shorty Bak er, Clark Terry, Ernie Royal or Arnett Cobb. From the '60s the drummer began focusing on leading his own band from a Philadelphia base, eventually shifting the tempo to include a schedule of private lessons. In 1989 he played on his 56th recording date and Butch is still going strong!
--
Posted by LoHo at 11/12/2006