A Wonderful Celebration It Was! 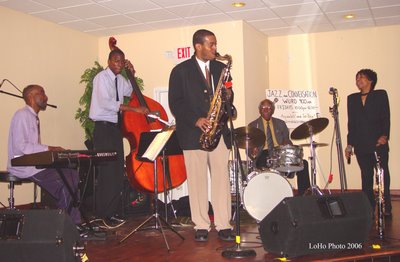 The PJB event celebrating Jazz Appreciation Month was a blast! The music was inspired, the facility was first class, the Patterson's Palace food lived up to the legends and the jazz community of Philly was well represented. The pictured musicians include (l-r) Alfie Pollitt on keyboards, Leon Boykins on bass, Terrence Brown on sax, Butch Ballard on drums and a true high priestess of song, Ms. Mich`al Beckham. Mistress of Ceremonies, Ms. Aqueelah, kept the evening flowing and choreographed the diva summit which occured in the second set when "Songstresses" Valray, Ella Gahnt, Nina Bundy, Carol Harris, Pearl Williams, Mharlyn Merritt and Denise King joined Ms. Beckham onstage for a spontaneous outburst of vocal dexterity (sangin')! We were graced with the versitile playing of "Philly's oldest jazz musician" (his words), Mr. Butch Ballard. Terrence Brown is the "one to listen out for", according to several highly respected jazz community members. Young Lion, Leon Boykins held his own and promises a solid future in the music arena. I am excited about the possiblities for the continued growth and exposure to the music of Philadelphia's jazz family.

The recognition portion of the program was led by a prayer for "Cousin" Mary Alexander, then comments by Thelma Anderson of COJA Philadelphia, Valray Productions and Aqueelah representing WURD 900 AM. A plaque recognizing the Honoree as the "Queen Mother" of the Philly jazz community was presented by Philly Jazz Blog to Carla Washington, who accepted for Mary Alexander.

A videotape of personal messages to the Honoree was recorded by student interns Ashley and Nydrea Gause from the New Media Technology Charter School, to be presented, after editing, with the plaque to our "Queen Mother".

New Media Tech thanks you much for the opportunity.

Hope we can do it again soon.